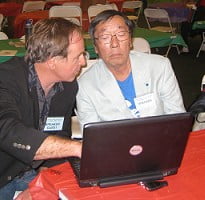 Were you aware Water has Memory? Did you know that we are 99.98% water by molecular volume?!

What is Primary Water and how is Water related to our sovereignty in consciousness?

Primary Water is primary to primates and consciousness in human (hue-man). Oceans of it exist under the mantel and within the depths of the oceans abyss, waiting for the redemption of man, and the primate to awaken and become primary in the hue of light and hue-man-wo-man.

We are ONE, source energy, drops from the ocean each of us. Our consciousness and conscious communities with Primary Water are crystalline networks, and the ocean is in the drop within the infinitely small projected into perceptions of the infinitely “large” light illusion.

In this intimate conversation-style setting at Music & Sky, Russell will describe Primary Water as related to Mount Konocti, and its nexus with the Ring of Fire and ages, centered by Hawaii as the planetary green olivine crystal heart chakra, where the Ringwood is sourced in prime time Primary Water. The heart is the temple that sets the tempo, and our direct connection to source, NOT the mind returning into balance between the artificial masculine and divine feminine intelligences. The quintessential emergence of the Essene essence of Primary Water, a foundation for co- creation and imagineering of a new world coming into view of a new kingdom, heaven on eart{H}eart..

Audience members will be inspired to their core with this discussion, joined by Cosmic Chris Sojourner, who adds first principle of the spirit that moves upon the face of the water in “quantum” terms of number and deep metaphysical insights into the Sacred Geometry of Mercury & Primary Water as essence in form, as aspects of information within Water’s primary intelligence in cycles and epicycles of time.

Water is pristine information as crystallographic structure of Primary Water in liquid quasi-crystal that contains ALL information ever expressed through phive phases and four causal forces in states. It is intimately connected to information in our DNA and the Akash as a liquid crystalline- fractal antenna.

Russell Anderson, CEO of Clear Water Vision, has been at the forefront of the Primary Water recognition and discussion for 26 years since touring the country with Yull Brown of the Browns Gas magic as fundamental to primary water as regards the hydrogen atom and oxidative states of oxygen.

It is now Divine Time for everyone to become acquainted with our “ancestry” in Primary Water and how our Consciousness with water “channels” the flow of all things on this planet. Water evolved before all life began as the organic nexus to source energy in the heart, if not the actual factual divine feminine intelligence in the mirror of the masculine artificial intelligence that the transhuman world is embroiled in NOW.

Russell was recently interviewed by Jean Nolan from the Inspired

YouTube channel & is next being interviewed by Dr. Emoto’s personal assistant Michico Hayashi, who served Dr. Emoto for 11 years. She promised him she would carry on his message and now works directly with his son Hiromasa Emoto at the Emoto Peace Project in Japan

(www.EmotoPeaceProject.net)..who plan to have a global water event with 150,000+ attending headlined as the Global World Water Festival event, following the Music and Sky to air worldwide on October 16 & 17 (www.WorldWaterFestival.net). Russell will explain to the Global World Water Festival why he feels there is a strong spiritual connection with both the late Dr. Emoto and the late Dr. Yull Brown.

Russell has been invited back to speak to the Inspired Tribe You Tube Channel for a second interview on Primary Water and consciousness. (As we know, Dr. Emoto proved water has memory, and words and emotions can change the material expression of life/reality.)

Chris Cosmic Sojourner as a structural engineer & had his world view demolished on 911, 2001 along with 2-planes in plain sight of twin towers as mirrors of Building 7 and the zeitgeist of delusion within a light illusion. Now 21 years on, the occupation “turned” to preoccupation.

Inverted in in the mirror of 45° about 90° and the unknown unknown became an ontology and epistemology that gave birth to a cosmology.

Morphogenic Matrix Math keeps time through the Geometry of Consciousness as the heart (ice) and the brain (fire). Water has primacy in the primate kingdom in prime time as sacred truth of prime number 2 & 3 in the prime number cross. Protoplasm and the magic inverse square matrix of the violet flame in red-blood blue- blood, binding oxygen in the sacrificial anode of Christos on the cross & the Magdalene rose archetypes. Sacred water is in the microtubule of DNA in the life crystal in the ten vowels in secret of light fire letters and the cubic thought form.

Water is the essence of life; without it we do not exist. We live and breathe by the water cycle. It is the circle of life on this planet.

We are Water and Primary water is rising from beneath the mantle to join us in co-creating heaven on eart[H}eart.